The enhancement of the extroversion is a key strategic option in the frame of the goal to change the productive model of Greek economy and to create conditions for faster and sustainable development, after the economic crisis.

In order to achieve a sustainable financial development, all the reforms that will strengthen the extroversion must be emphasized.

In recent years, within an adverse financial environment, we have particularly noticed that the exports of products have steadily increased. Extraversion has worked for many Greek businesses, especially for the Thessalian ones, as an antidote towards the consequences of the recession, mainly against the vertical decline of domestic demand.

Thessaly ranks in the third place among country’s regions in exports, with Attica and Central Macedonia Region first and second place respectively, holding a 4.6% (including petroleum products).

Export businesses and especially the productives, are now the only ones that resist and it’s be shown that the majority of them are going to be relatively healthy, being the only hope for economic growth and the way-out of the economic crisis as well.

For those businesses, there should be a specific policy so as not only to support them but also to ensure their sustainability and development, in an increasingly competitive international environment, as well as the deterrence of their transfer/ immigration abroad.

The measures that may include such a policy should be designed and tailored in such a way so as to achieve the desired objective on the one hand and to ensure the compatibility with Community Data on the other.

Increasing the extroversion of Greek businesses is, now, a great challenge for the national economy. Our export performances have been improved in recent years, but the significant reduction in labor costs has not been denatured to the extent that should have been into a substantial increase of market share in international trade. Unfortunately, a series of internal and external barriers stand in the way of businesses in their attempt to conquer international markets.

The key to boosting exports remains the need to scale up the Greek businesses.

Achieving greater numbers for Greek businesses will boost their productivity through scale economies, allow them to invest in research and technology, attract skilled staff and finally will strength their negotiating position. The scale-up will create a positive bidirectional relationship between expansiveness and extroversion.

The Association of Thessalian Enterprises & Industries (STHEV) through its businesses-member and its extrovert character can contribute to the configuration of a realistic plan for the development and extroversion of the Region of Thessaly.

However, to reach the country’s extroversion goals, there are more to be done. There are still significant structural challenges that we must confront.

President of the Association of Thessalian Enterprises & Industries (STHEV) 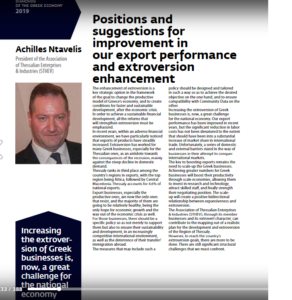